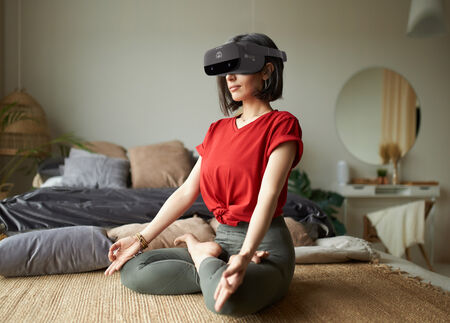 The way we speak about “being healthy” today is very different to how it was spoken about in the past. For example, in the past, we’d never have considered using virtual reality for mental and physical health!

Oftentimes, “healthiness” was exclusively associated with fitness, strength, and aesthetics only. What you ate and how much you exercised supposedly determined the entirety of your wellness. However, we know very well that this view of health is only part of the story. Today, the scope has widened, and rightfully so, to include mental health.

A change in our collective perception of health isn’t the change that we are seeing.

Technological innovations have been launching in multiple industries, and the health industry is no exception. The development of virtual reality (VR) tech, paired with a growing emphasis on maintaining a holistically healthy lifestyle, has given rise to a variety of medical VR applications for both mental and physical health. Although still in its infancy, the impacts of VR therapy for patients suffering from a range of health issues looks promising.

Some of the physical and mental health conditions that VR is proving beneficial for include:

One of the biggest issues that VR helps people overcome is a general lack of physical activity. According to the World Health Organization (WHO), approximately 80% of adolescents around the world are physically inactive due to lifestyle factors. This lack of activity should be no surprise. After a typical 8-hour workday or a long day at school, it’s easy for us to come home and collapse on the couch.

But, it’s important that people try to find the time to unwind and move their bodies. VR exercise turns this often dreaded task into engaging simulations that people actually look forward to, such as virtual cycling. The idea began with the development of three-dimensional displays on TVs in which controllers weren’t needed for users who wanted to exercise. VR picked up where this tech left off by jumping from 3D to completely immersive experiences. Studies are now showing the tendency of VR to increase the likelihood of long-term adherence to exercise.

For those who are seeking to mitigate the effects of disease or recover from physical bodily harm, VR technology has begun to show some positive results. Children with cerebral palsy, as well as patients suffering from strokes and Parkinson’s disease are seeing a significant improvement on their balance abilities with the use of VR. A recent study suggests that stroke patients may also regain motor functions through VR therapy – “…researchers suggested that VR could promote the lower limb function of patients who suffered from stroke.”

VR is working to improve upper limb mobility by showing patients avatars of their upper limbs, then having them visualise their attempted movements to perform a task. For example, VR can simulate a sword in a patient’s hand, then tell them to slice through line targets on a screen, making the experience more fun and a source of motivation. Over time, the patients develop improvements to their motor-imagery, enhancing their ability to plan movements and lead to a steady recovery of upper limb motor functions.

From a physical therapist’s point of view, the use of VR to streamline the processes of gauging feedback and upholding patient accountability is a plus. Through the analytical data gathered from therapy sessions, therapists can track whether patients are showing improvements. Accordingly, they may have the patients progress to more difficult exercises and ultimately normal physical activity. They can also monitor if patients are performing their programs at home, as opposed to assigning pamphlets and pictures to the patients in hopes that they’ll practice them on their own.

Looking to balance its capability of helping patients on the other side of the health spectrum, VR is making its mark on mental health.

Anxiety is a mental health issue plaguing a significant portion of the human population. Most observable in teens, a deepening pressure to succeed and live a certain lifestyle because of comparison to others on social media is a major anxiety driver. Constantly feeling like you’ll embarrass yourself in front of others, a pressing unease in crowded settings or any hindrance to perform day to day tasks as a result of  social pressure are all symptoms of anxiety. Prior to the emergence of VRET (the VR version of exposure therapy whereby individuals are required to confront the source of their anxiety) patients would visit therapists and describe their emotional troubles in the past tense.

With the use of VR, therapists can engage patients in real-time simulations that emulate the fears they speak about, and adjust for intensity in the process. The value here is that the therapist and the patient can both be present in the fear-inducing situation at the same time, allowing for immediate and effective confrontation and discussion of how to overcome that fear. Additionally, VRET is often more acceptable to patients than imaginal or in vivo (having the patient directly experience the anxiety provoking stimuli) exposure therapy.

New research supports VR’s ability to overcome stress and reduce depression in patients. Currently, virtual reality therapy is showing potential to promote distress management, mood enhancement and stress relief. Because depression patients often lack the motivation to step outside their familiar home environments, virtual reality recreates any setting imaginable for the user. For example, patients can dive into coral reefs, watch a sports game, or take a pleasant stroll through the forest to the music of a soft piano melody from wherever they’re located.

A study aimed to uncover the effects of virtual reality on mental wellness, reports an overall positive impact of using VR to treat patients. The use of the technology yielded lower stress levels as a result of lower heart rate and higher skin temperature. Patients also reported higher levels of relaxation. Because the study tested patients using a variety of immersive technologies, future studies looking at which specific aspects of VR benefits patients are yet to be done. Regardless, VR is currently being used and monitored for patient feedback.

Shifting the focus to our youth, VR tech can also aid students who display problems in the classroom due to being plagued with anxiety when having to perform tasks in front of peers. Other students who are stressed due to highly competitive education systems may also benefit from the use of VR to reduce stress. Additionally, student athletes who need support to mentally unwind and prepare for games may also turn to VR as a collaborative platform to connect with sport psychologists.

VR Therapy and What’s Next

After getting to know VR’s multifaceted personality in greater depth, it’s apparent that its potential to help patients improve their health abounds. In recognition of its versatility, virtual reality company Foretell Reality is widening its scope beyond using VR for immersive therapy sessions only. Together with XRHealth, Foretell is working to merge VR tech with physical therapy to reap the best outcomes for patients in need.

The goal is clear: to effectively improve the mental and physical health of as many patients as possible. Today, the means to achieve this goal is with virtual reality. 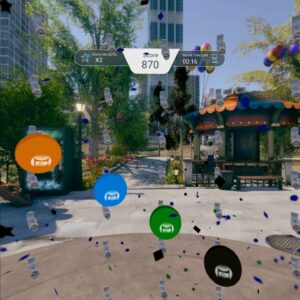 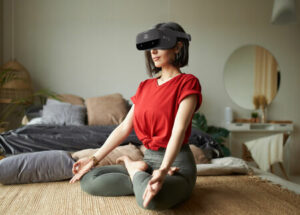 XRHealth Newsletter
Subscribe below to receive updates about our industry and products.

*By clicking submit above, you consent to allow XRHealth USA Inc. to store and process
the personal information submitted above.